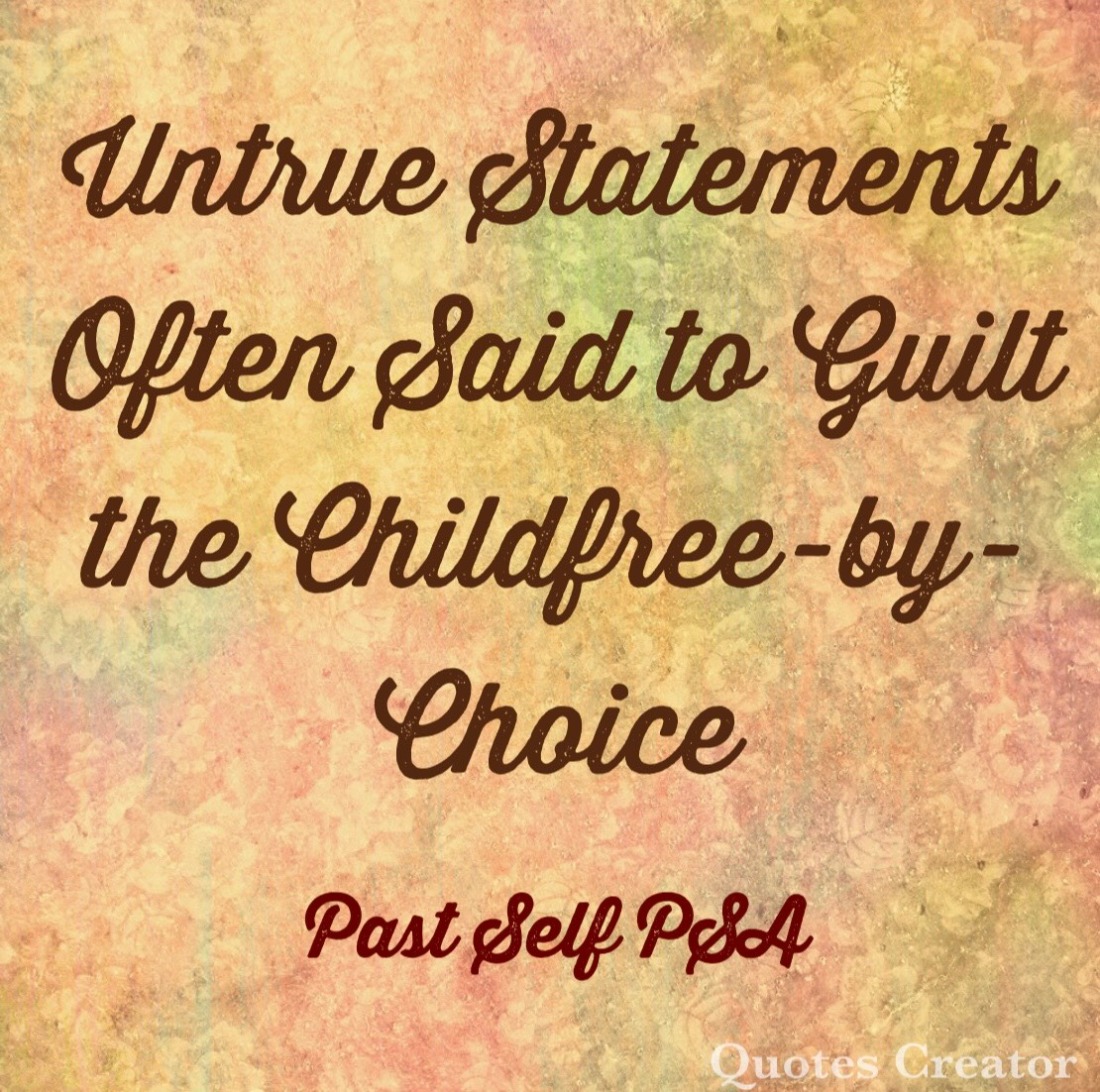 In this post:  I discuss  how many who have children (and even some who don’t!) say hurtful damaging and untrue statements to the child-free-by-choice especially in regards to women and couples.

Like I said in previous posts…. it’s your life, they aren’t raising those kids, they aren’t doing your job, you got to live your life for you. No selfish about it, because if you were to tell them to do your paperwork or raise your kid, they would say that they have “their own things to do” so in turn if they call you selfish well within their logic, they too are selfish. This comes from the mentality that somehow parenthood is more noble than any other pursuits… however, though there is A LOT of sacrifice in becoming a parent, there are many people who have children who are definitely not noble or even make those sacrifices (such as those parents that aren’t there for their children or hurt their children)… and being childfree doesn’t mean that you are some immoral individual that doesn’t care about the world (but you can be just as much as a parent can be too) there are lots of childfree who use their financial means to support causes, or are involved in volunteering which is very unselfish.

Those who call others selfish for not having kids, are in turn selfish because they believe their life is more noble than others.

Also, many times these are the same people who say, “don’t you want to have someone to take care of you when you’re older?” (That’s a pretty freaking selfish reason to have kids… if you are a parent, you should know that your kids technically don’t owe you anything… and with the economic state of the United States, more often than not parents are now taking care of and housing their kids into their 30s, those “kids” can barely financially support themselves, let alone their aging parents… also many of them will in fact have their own kids to raise, usually because those parents are pushing their children to do so… they won’t be taking care of you. Many of these people who say they deserve to be taken care of, well many of them will be put into homes and forgotten… I would rather, prepare for my own situation instead of having kids just to put the burden on them!)

This is some guilt inducing BS that people with babies say all the time to make those without feel like pieces of crap, and those who have kiddos feel justified for their life choices…. If you don’t know what I am talking about, a lot of people say/have said, “You don’t know REAL LOVE until you have become a parent/mother.”

Okay so the only way I sort of in the tiniest most abstract way agree with this is that there are definitely lots of different types of love, with many different facets within each type. However, that isn’t the only real love, and I do not agree with how they say it, that makes it sound like the final boss to beat in the video game of “Life & Love”… no that’s not the case.  This type of love (the nature based biological bond of willing to do anything to protect your young) isn’t necessarily love but more maternal/paternal instinct… which can still be felt to a degree when put into a caregiver role even for an animal or other individual and not your biological child. (Also, there are many out there that despite having children, do not feel this type of bond, so to say that people will feel it guaranteed by producing a child, is just not so.)

So I will agree that being a mother is definitely a whole different type of love. But that doesn’t mean you don’t know “real” love. It doesn’t mean that you cannot be a caregiver and know the love of being a parent without physically producing.

To suggest that motherhood is the only real love, would suggest that all other loves are fake. Which is awful… the only fake love out there is when someone is “pretending” to care about someone or leading someone on.

So you can feel “real” love without being a parent… and parenthood is another type of love, and yes you can still feel that parenthood-type of love through some other form of being a caregiver… it doesn’t make all other forms of love invalid.  Sheesh.

On being a real woman…

Saying to someone that they don’t become a real woman until becoming a mother is just awful and incredibly stupid. Motherhood is definitely an incredible calling. It can be taxing both physically and mentally. There are many aspects to motherhood… but the thing is saying you aren’t a real woman is so much crap, because the thing is, that those people who say that type of thing are the same people who don’t see women as WOMEN or even as people… it’s the same as that picture that says “Don’t rape her BECAUSE she could be someone’s sister, someone’s mother, someone’s daughter”… I don’t know maybe don’t rape her because she’s a human being that deserves respect? Putting things in that way takes away “womanhood” take’s away our humanity.

Being a mother is an option. But if you don’t become one doesn’t mean you are somehow devoid of being a woman.

Saying this is also kind of like saying, you aren’t a real singer unless you sing opera… That negates all the other forms of singing and music out there.

Motherhood is an optional path of life… being childfree is just as valid as being a mother when it comes to life choices.

HOLD UP, What?? That’s right people have said this to me and other people I know… Some have even called me and others “selfish” for not having kids when we know that there are other people who desperately want to be parents but are unable to conceive. Yea can you believe that crazy, ass-backwards, looney-bin logic?

Okay so unless I am conceiving only to hand that child over to the people who then cannot have the kids, then this logic is not in fact logical at all. And is just more guilt inducing crap to get someone who doesn’t want to procreate to do so.

With that logic… then the following things would be true

One of the biggest statements most childfree adults have flung at them is, “You’ll regret it.” As in you’ll regret not having kids… To which I say, they don’t know you and your life. There is a great potential to regret many things… and in fact there are people out there who regret being a parent. (I have heard that there is a whole sub Reddit on this?  Either way, if you google regretting parenthood, or regretting having kids… you will find a lot of stuff… people might not be willing to admit it out in the world, but they are admitting it on the internet. Also there are a few books and websites dedicated to this very topic, of people regretting HAVING children.) So, like I said, maybe you could regret not having kids, but you could also regret having them! You know yourself and your life better than any of these people, so make the choice that is right for you based upon those factors.

ALSO TO ALL THOSE PEOPLE WHO SAY THIS STUFF…

YOU ARE AN INSENSITIVE IDIOT!!! Really? Really? Saying things like “You don’t know real love” or “You’re not a real woman” in regards to a woman not having kids… is so incredibly insensitive. Maybe that person has some deep complicated stuff going on!! To which you say… “But they didn’t seem like they had stuff going on!”… Well maybe since you are an assuming jerk they didn’t have a chance to tell you, or maybe because it’s their own personal business they didn’t want to share it with you (because they do not have to, not even if you are their parent or family member or co-worker or bestie or whatever)….  You may not know the whole story… you don’t know what that person deals with. They could have a crippling disease/illness (there are many physical and mental issues that people tend to call “invisible illness” that the person does not look ill but is quite so); they could be barren and unable to produce children and have been struggling trying to produce children; they could have terrible PTSD of familial abuse or have phobias such as tokophobia… you do not know someone’s life.

And it’s also super awful to include the childless not by choice people in your attack on the childfree… because you are essentially weaponizing someone else’s pain/situation against someone else for no good reason. Not cool.

TLDR/ In Summary:  As I said in a previous post, to be or not to be a parent is a choice, no matter the choice you deserve to have those choices respected and not negated by false & guilt-inducing language.

So unless someone asked for your opinion, don’t be a jerk, and butt the freak out!

This has been a much longer and perhaps slightly heated, Past Self PSA, now remember, YOU GOT THIS!!!!

I’m just me. Redhead Female Early 30s Married Live on East Coast of US View all posts by Heather